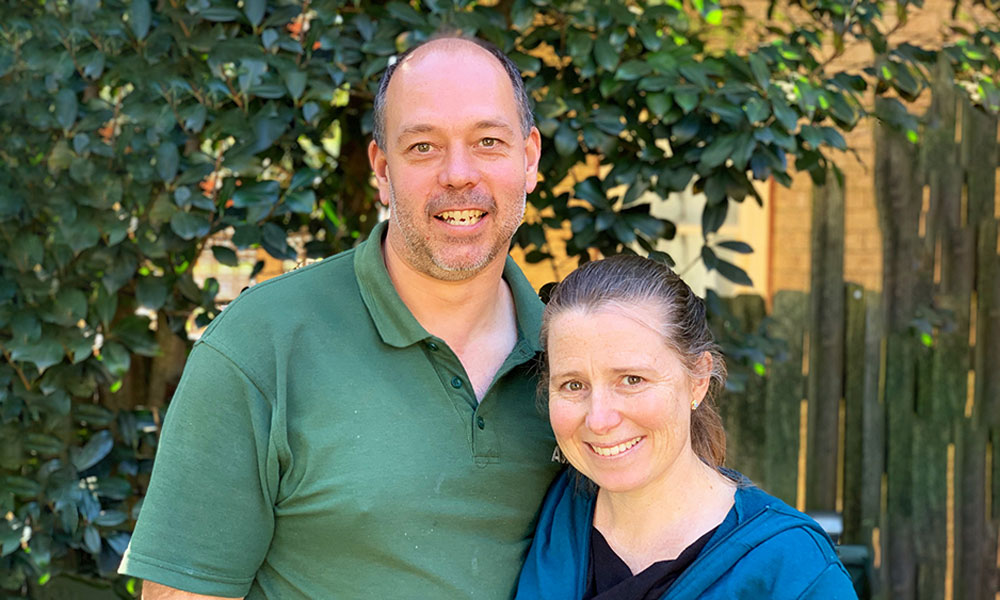 Article reproduced from Eternity News.
How a couple learned to delight in God

When burly plumber Brian Stuckings and his wife Vanessa revealed they were doing a three-day Emmaus Walk, people asked if they were in training.

In his typically straight-faced, unflappable manner, Brian clarifies for Eternity, “It’s a spiritual walk, not a physical walk.”

“I know I’m precious to God. But I don’t often stop and delight in that.” – Vanessa Stuckings

“You do a lot more sitting than walking,” Vanessa says with a laugh, before unravelling the “really positive, scary, lovely” experience that Emmaus Walk was for her.

She starts with its scary beginning: “I went kicking and screaming because I knew that I would have to stop and be confronted by the fact that God loves me in a way that I had been potentially putting off,” she admits. “It was a bit like going to the dentist in that respect; I knew I needed to go … and desperately wanted to go, in all honesty.”

But as a doer – a working mum who, along with Brian, is highly involved in ministry at their church in northern Sydney, as well as running bi-annual Presbyterian youth camps and even overseas mission work ­– just stopping to allow God in was hard.

“I was like, I have my view of God, I know God loves me, I know I’m precious to him. But because I don’t often stop and delight in that, I was scared of doing that,” Vanessa says.

“I’ve been a Christian for 30 or 40 years, and there’s never been a time where I’ve not known that God loves me … but there’s knowing and then there’s delighting.”

Meanwhile, Brian was keen to experience Emmaus Walk on the recommendation of his sister, who sponsored them to take part (a sponsor is someone who has done the Emmaus Walk, and provides financial, practical and prayer support for someone else to attend).

So, the Stuckings finally committed to going this year when Brian joined the annual Newcastle Central Coast Emmaus community’s men’s “walk” on May 30 to June 2 and Vanessa the women’s on June 13-16, both held at a conference centre in Lake Macquarie, on the NSW central coast.

“You’re thrown into this environment which would normally be quite confronting, but it’s actually quite the opposite; it actually invites you in,” says Brian.

“For a bunch of guys, that’s a bit out there, but … it actually wasn’t scary because everyone was undergoing the same journey process … So there’s that sort of corporateness of the journey, which I think was helpful.”

What is the Emmaus Walk?

The 72-hour Emmaus Walk is an interdenominational weekend retreat designed to bring about “Christian spiritual renewal and formation”. The retreats, which each have about 10-20 participants or “pilgrims”, are based on their biblical namesake: the story in Luke 24. Two disciples meet the risen Jesus on the road to Emmaus and he explains the Scriptures to them, leading to their eyes being opened and their “hearts burning”.

Similarly, the aim of the Emmaus Walk (according to its website) is for pilgrims ­to “meet Jesus Christ in a new way as God’s grace and love is revealed to you through other believers.” While each retreat is run by a local Emmaus community, they follow the same format worldwide.

The retreat was created by the Walk to Emmaus organisation, which began in the United States in 1981 and now has Emmaus communities throughout the US, South America, Europe, Africa and Asia Pacific. The organisation is run wholly by volunteers, with each community being self-governed, while sitting under the administration of a national body and the governance of its global founding organisation, The Upper Room in the US.

Many thousands, perhaps even millions, of pilgrims have taken part in Emmaus Walks across the world. The aim is that these pilgrims will be refreshed and equipped to go back and serve the local church, as well as in their homes, communities and workplaces. In fact, the three-day retreat is seen as just the beginning of their pilgrimage, with their continuing discipleship journey described by Emmaus as the “fourth day”.

After the first Emmaus Walk was held in Australia in 1984, Emmaus communities sprang up in every state and territory. There are 20 Australian communities still active today; however, as enthusiasm has waned over the past 35 years, it’s becoming harder to sustain these groups and several other communities have become dormant. In fact, the Sydney Emmaus community – where the Australian movement began – has been in recess for a number of years.

“Not have to think about the future was quite liberating.” – Vanessa Stuckings

But while the appetite for Emmaus has dampened, Brian and Vanessa believe these retreats are more necessary than ever.

“We cram so much into our life that to be sort of hand held and just and not have to think about the future was quite liberating,” says Vanessa.

She continues, “I was nearly crashing and burning because I wasn’t stopping … Sometimes I think the more we do, the more we think we’re fine, and we do things in our own strength rather than refuelling all the time.”

In a highly counter-cultural move, pilgrims relinquish watches, phones and other devices for the whole weekend. A bell wakens them in the morning and a timekeeper advises pilgrims what the next activity will be, in keeping with the retreat’s mantra: “Don’t anticipate”.

“Right from the start you’re stripped away of the trappings of time and control,” says Vanessa.

“You couldn’t plan because you didn’t know what’s coming. That was a physically helpful thing, but also a spiritually helpful thing too; you had to focus on what you were learning about God or about yourself at that moment – you couldn’t escape it.”

“We talk about love all the time, but often you don’t necessarily get loved.” – Brian Stuckings

The program includes five talks each day (15 over the weekend) on aspects of God’s grace by “spiritual directors” (church ministers or chaplains) and lay leaders who are part of the Emmaus Walk community. After talks, there is discussion in small groups, as well as times of worship, communion, private reflection and Bible reading.

Prayer plays a major role in each Walk, with a designated team praying for all the  preparations and participants long before the event happens. On the weekend itself, a 72-hour prayer vigil is held by people praying on site at all hours of the day and night, while the global Emmaus community prays for the event from afar.

Another key focus of the weekend is to make pilgrims feel loved – extravagantly – as a reflection of God’s love. They are showered with “grace gifts” and each small group of pilgrims is assigned a spiritual director to listen to them, pray with them and help them connect with God’s plans for their life. Pilgrims are prevented from lifting a finger all weekend – with meals catered and served by a hefty team of volunteers from the Emmaus community (up to 40 volunteers are involved in each weekend).

While Brian admits that “being loved on” in this way made him “somewhat uncomfortable at first”, he adds, “it was nice to  be on the other side of the fence.”

“Just stopping and being loved was something that’s unusual in church circles. We talk about love all the time, but often you don’t necessarily get loved,” he says.

“I think that just highlights potentially how much you normally don’t get from the world, from your church community and at home … I mean, you love each other, but how much do you actually show it with all the pressures of life that take over?”

Vanessa illustrates how the care of the Emmaus community moved her from fear to a place of safety where she could “be vulnerable and open myself up to God”: “They do it in such a gentle and beautiful way that the whole journey is like you’re on this boat just gently drifting down a stream ­– it’s not rapids. It’s scary because you don’t know where the boat’s going to take you, but it is gentle and it’s beautiful.”

“My biggest lesson is the delightfulness and the necessity of stopping and just being in God’s presence,” Vanessa explains, adding she intends to share this message with other women so they don’t get burnt out.

Noting that her relationship with God is now far deeper and more personal, she demonstrates how before the Emmaus Walk, she was keeping God at an arm’s distance but during the weekend, she allowed God to take her hand.

“Because I’ve grown up so Reformed, you know so Presbyterian, sometimes that relationality of God can be lost in the fabulous head knowledge you get. But that’s what I’ve been craving … just stopping and being aware of God in a relational way, holding his hand. And that’s what God wants; it’s a biblical principle. He’s not out there at a distance away, he’s with us, he’s in us, he wants us, he holds us … and that is an intensely personal and relational thing.”

Vanessa likens the whole experience to a toddler jumping into a pool and hoping their father is there to catch them.

“He’s with us, he’s in us, he wants us, he holds us … and that is an intensely personal and relational thing.” – Vanessa Stuckings

“Not only did God not drop me or let me fall, he just surpassed what I could have imagined – that sense of peace and love was overwhelming,” she concludes.

“I’m walking away with a bit of a challenge,” says Brian, “to think about how I could show love more effectively in everyday life circumstances.

“I think it’s one of those things that as you go on in your Christian walk, it permeates into your life and, hopefully, it just becomes an attitude that you have all the time.”

In summing up his Emmaus Walk experience, Brian adds: “For me, that was certainly what was needed – just stopping and refocusing. It’s almost like setting your compass again to where you need to be, where you’re heading.”

Walk to Emmaus Australia is keen to reconnect with anyone who has taken part in an Emmaus Walk, either here or elsewhere in the world. They would also love to hear from people who would like further information about reunion groups, the Emmaus Walk and other activities.

To get in touch, email This email address is being protected from spambots. You need JavaScript enabled to view it.